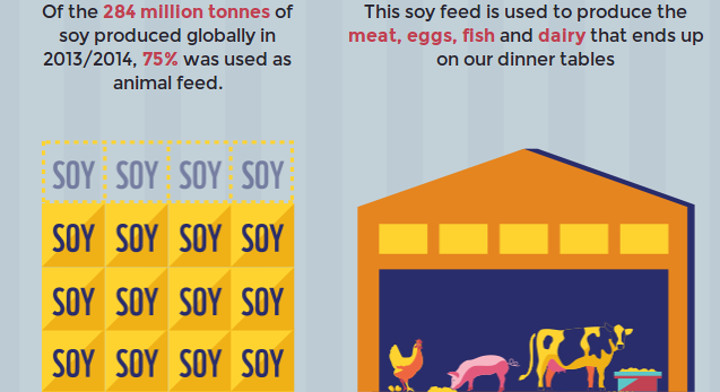 WWF has highlighted this information just prior the opening of the annual conference of the Round Table on Responsible Soy (RTRS RT10) taking place in Brussels on May 19 and 20. The statistics on EU soy consumption are drawn from a new WWF-commissioned research report by Profundo, Mapping the Soy Supply Chain in Europe.

A key part of the global food supply, soy is a beneficial, high-protein crop that can have negative impacts on people and the environment if grown irresponsibly. Its explosive growth over the past 50 years has come at the expense of millions of hectares of forest, grassland and savannah that have been converted to agriculture around the world, and in particular in South America, either directly or indirectly as a result of the soy boom.

"Most European consumers have no idea how much soy is embedded in their favourite meat, dairy, eggs and farmed fish products," stated Sandra Mulder, acting lead for WWF’s soy team, "Even less understood is how this hidden soy has had a devastating impact on some of the worlds’ most valuable ecosystems, such as the Amazon, Cerrado and Gran Chaco."

"WWF feels that a crucial short term strategy is for companies that buy soy or animal products raised with soy in Europe to make commitments to responsible soy and start buying it now.  This will send an immediate message to producers in South America that EU buyers want soy that has not been produced at the expense of nature, soy workers or communities in soy growing areas."

"It is time consumers start to realize how their consumption can be linked to irresponsible practices. Companies providing these products can no longer wait and need to act. Frontrunner companies in the retail and dairy industries are already showing that sourcing responsibly produced soy is both possible and feasible."

WWF urges EU consumers to take action and contact their favourite retailers, fast food companies and brands to ask them to source responsible soy such as that produced under the Round Table for Responsible Soy (RTRS) scheme, or for markets favouring non-GM soy, RTRS-non GM or ProTerra soy.  WWF also urges consumption of animal protein in line with national health guidelines.

In 2014 WWF issued the Soy Report Card which evaluated the progress of 88 European retailers, manufacturers, meat and egg and feed companies on their actions on responsible soy and found that, despite a few positive exceptions, European companies are not doing enough to promote responsible soy production.

WWF intends to update its Soy Report Card in 2016, reviewing the progress European companies have made on commitments to source soy from responsible sources.